SXSW…pt 1: Party at Round Rock

The time has come- I’m going to give you the lowdown on SXSW, aka: SB ‘0’10. I wrote a totally off-topic, long-winded report detailing my experience at SXSW, in the comments section of a Boston Phoenix slideshow (featuring my likeness). This comment was beautiful, but justifiably deleted. Now, I must do my best to write everything (perhaps to excess detail) I can that captures the time I had in Austin- that seems right-on to those who were there yet crystal clear to those who weren’t. 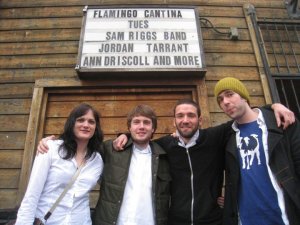 My band (me, Justin Hancock, Dabbo Caucci, and Bruno Esrubilsky)

In this first installment, I will be talking about my relaxing first 3 days in Round Rock, TX, a suburb north of Austin. Herein, you will read about southern hospitality, pimpin airport shuttles, Annwiches, fifteen Berklee kids on a living room floor, Mr. Zen the pooch, Mr. Whiskey the cat, and more.

First– the technical details. I flew from Boston to Austin on Sunday, March 14, and flew back Saturday, March 19.

In that time, I played three shows with my band, termed somewhat obviously, “Ann Driscoll” (Dabbo Caucci on bass, Bruno Esrubilsky on drums, Justin Hancock on guitar). The shows were as follows:

I will talk about the shows in greater detail later (w/ videos and pics to illuminate), including recaps of the performers I shared the bill with. But let’s start when I first suspected that Austin would be badass. I stepped off the plane, my jeans still wet from the torrential thunderstorm that befell Boston that morning- and immediately felt the warmth radiate from the big windows of the airport. I got a voicemail that said that our shuttle at the airport was upgraded from a van to an Escalade, and our driver, Michael was waiting for us with one of those cards with your name on it (except this time it was my name). I found this all probably more special than I should have. 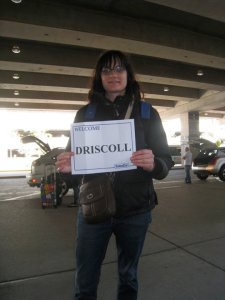 Michael was incredibly accommodating and friendly, regaling us with his suggestions on the finest Austin nightlife. He also took us on pit-stops to Walgreens and Waffle House (Dabbo, a Georgia boy, had a craving)…Like much of southern cooking, Waffle House is not very vegetarian-friendly, but I did try the home-fries and they were pretty out of this world…

Like every other Waffle House...yet, somehow, not. Photo by Bruno Esrubilsky

After these pleasant excursions, we finally got to our destination: Round Rock, a suburb north of Austin where we spent our first three days. Apparently, this place is famous for their donuts (as featured on one of my favorite TV shows: Man V Food). It also will soon be famous for being the home of Gene Brown and emerging country act, Merry Go Round. Gene, respected throughout Texas as a musician, producer, and engineer, hosted about 15 Berklee kids at his lovely, cozy home. His daughter, Evelyn, graduated from Berklee this December, and she and Ashley Root (another Berklee alum) formed the incredible Merry Go Round in 2008. I wrote an article about the group for Berkleegroove.com. They just released their Gene Brown-produced debut record on Amazon.com, and objectively speaking, 99 cents spent on the song “Be With Me” is money well-spent.

The way it all went down is as follows: Gene’s company, Tono Music Group secured the gig at Flamingo Cantina’s months and months ago and Evelyn invited her Boston buddies (I, being one) to play the showcase. She, Ashley, Gene, and Steph (Evelyn’s mom) then went the extra mile and gave us all an incredible place to stay, drove us around, picked us up from the airport, and made us incredible home-cooked meals. The Round Rock crew from Boston was Nini+Ben (which included their drummer, Jake Cohen and bassist, Derek McWilliams) Zac Taylor, Yasmin Tayeby, and Kris Roche. Keeley Bumford of Black Kettle, Curran McDowell, Megan Lui, Tamsin Wilson, Alex Krispin, Russell Lacy, Tommy Bohlen, and Jordan Tarrant were staying elsewhere and also chilled in Round Rock. 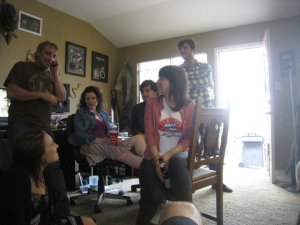 Gene and the gang in the living room/home studio.

During the day, we’d wake up to a fresh, home-cooked breakfast prepared by Ashley and/or Dabbo, and Gene’s unique brand of southern hospitality. And then drink some beer (Shiner, a Texas brew, is the shit), sing and play songs on the porch, and go on little adventures around Round Rock.

Playing music on the porch was awesome...

Especially when Ashley takes no prisoners with the hose

We went to a place called HEB, which was the most insane grocery store ever. Everything truly is bigger in Texas (including the people, yikes). This store had an actual live cooking demonstration in the middle, complete with chef with fiery wok and face-mic. In the alcohol section, there was a lady offering samples of three different kinds of beer and three different kinds of wine- all of which I individually sampled. I mean, I know grocery stores have evolved to become bigger and more extravagant, but HEB set a new standard in my book…This is to say nothing of the friendliness of everyone I encountered while out at Round Rock. Say what you will about it – People are fucking nice in Texas, and yeah, it elevates your mood a bit.

The weather the first three days was beautiful for the most part, which made hanging out on the porch optimal, and the Browns have two amazing pets that were constantly the life of the party: Whiskey, a quirky, mischievous cat; and Zen, arguably the sweetest dog I’ve ever met. To say that Zen is affectionate is an understatement. This dog exists for the love of human beings.

The scene at Round Rock at nighttime was that of a big slumber party; all 15 of us crashing in the Brown living room, 2-3 to a mattress. Needless to say, we all got real close…Dabbo and Justin formed an “Annwich” with me in the middle.

Tuesday, it was Dabbo’s 23rd birthday, so we celebrated at midnight on Monday with phallic cake and pinata, courtesy of Ashley and Evelyn.

Even though it may seem like I am giving excessive amounts of detail about Round Rock, I’m still probably not doing the sheer goodness of the vibes justice. I was concerned that my week at SXSW would involve mucho stressing out about the shows, my music, networking, etc but my experience the first couple days at Round Rock was so relaxing that it really set the laid-back tone of the rest of the week. I certainly believe that my band and I played our best because we got to decompress from our stressful lives in Boston and because we all bonded so strongly at the Browns. While most of our lives have intersected in various ways (playing in each other’s bands, on each other’s sessions, etc) it was especially cool to see new friendships being formed.

…Stay tuned for the next installment: showcase number one at Flamingo Cantina’s, Black Kettle’s impromptu daytime gig, my lover Prescilla, and my impressions of Austin as a city.

2 responses to “SXSW…pt 1: Party at Round Rock”