[Stunt Casting] brings a whimsical but foreboding pop to the single that captures the same sense of mystery but with a unique identity.

Taken from Pushpins – her new EP full of musings that meld the personal and political — “Canary’s Corpse” combines delicate flourishes, an entrancing melody and a muscular bass line to create an immediately arresting tune. It’s also the rare musical parody that functions as a cohesive piece of music on its own.

After my set, I got my front row seat for Ann’s full band show which was fabulous. Her new songs jump from pop to dark satire to grunge to lush melodic rock. I knew every word to her old tunes, which I used to hear back at TT The Bear’s and Tommy Doyle’s in Cambridge seven years ago. 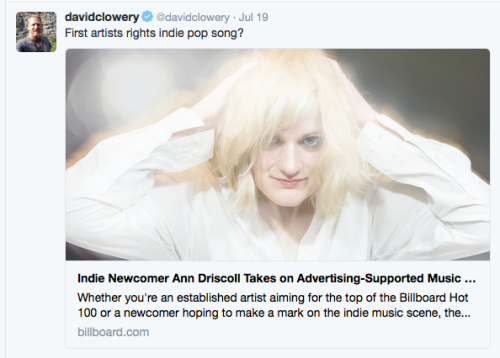 It’s a fun song to listen to that starts out sort of Beatles-esque from the Sgt. Pepper era, then develops a life of its own. The instrumentation and time signature definitely give the song a circus feel. The lyrics are clever and on the surface they appear to be quite literal, describing the life of the Ringmaster. With further consideration, however, the lyrics could apply to anyone that must perform before an audience (sometimes I think about politicians giving speeches when I hear this song).

There are also live versions of this song on YouTube that are excellent. They are a bit more stripped down, but the added energy of the live performance gives the song a little something extra, too.

Driscoll is a Cincinnati native with the Beatles in her voice, Kurt Cobain in her hands, Elliott Smith in her writing, and a hint of Fiona Apple in her swagger…Also the front person for all-girl dance rock band Mrs. Danvers, Driscoll’s catalog continues to define itself as dark and edgy content juxtaposed with super-catchy melodies and highly sing-along-able choruses; the tunes “I Wanna Be Your Zombie” and “I Wanna Believe You” perhaps exemplify this delightful contradiction.”

” …at age 20, her songwriting already possesses the kind of wisdom, originality and maturity that can’t be learned in college. Driscoll’s self-released, self-titled EP is an engaging exhibition of blunt, catchy (but not predictable) Pop, with vocals that recall pre-blatant-sex-kitten Liz Phair and a writing style that is obviously informed by prime influences like The Beatles and Nirvana.”

“You have a good song writing sense, and I obviously appreciate honesty in lyrics, and you’ve got that. You have talent, girl. Just know it. You’ve got it. I am impressed! Congratulations.”

“This was my favorite act of the night. I wanted to get on stage and leap into the crowd. “What Did I Do” by Ann Driscoll stole the show. Her song had a frantic energy and rocking beat. Her voice was at one moment soft and sweet, and in the next moment, a howling screech. No doubt about it, this girl was born a rock star…”

“Ann Driscoll creates entire worlds with each song, utilizing instruments, sound effects, lyrics, and tone to paint a very vivid picture. “I Wanna Be Your Zombie” has her clawing out of the grave to sinister organ music that veers into rousing goth-rock opera. “Ringmaster” takes the listener on a trip to the circus with a heartbreaking, beautiful violin score interrupted by comically abrasive trumpet.”

“The charm of this Beatles-influenced Indie rocker did not lie in a sweet or predictably melodic voice, but rather in her quirky songwriting and passionate on-stage presence. Her compositions have danceable and sometimes unconventional grooves, from disco funk to eerie circus waltzes. She is unafraid of drastically altering the timbre of her voice to fit the contour of the songs, such as a rough edged (bordering on satirically operatic) melody line in the chorus of “I Wanna Be Your Zombie.” She sings unabashedly about topics such as why “Jesus Don’t Like Beggars” and also with uninhibited ferocity in the angst filled “Make Up Your Fucking Mind.” Her appeal is noticeably disparate from the mainstream, but inevitable.”

“Ann Driscoll…had me and the rest of the audience at Pizza Bar wrapped around her little finger, telling us personal stories, song backgrounds and making us sing along. Her strum-heavy style matches the insistent vocals, and while both are melodic, this material is no snooze-fest.”